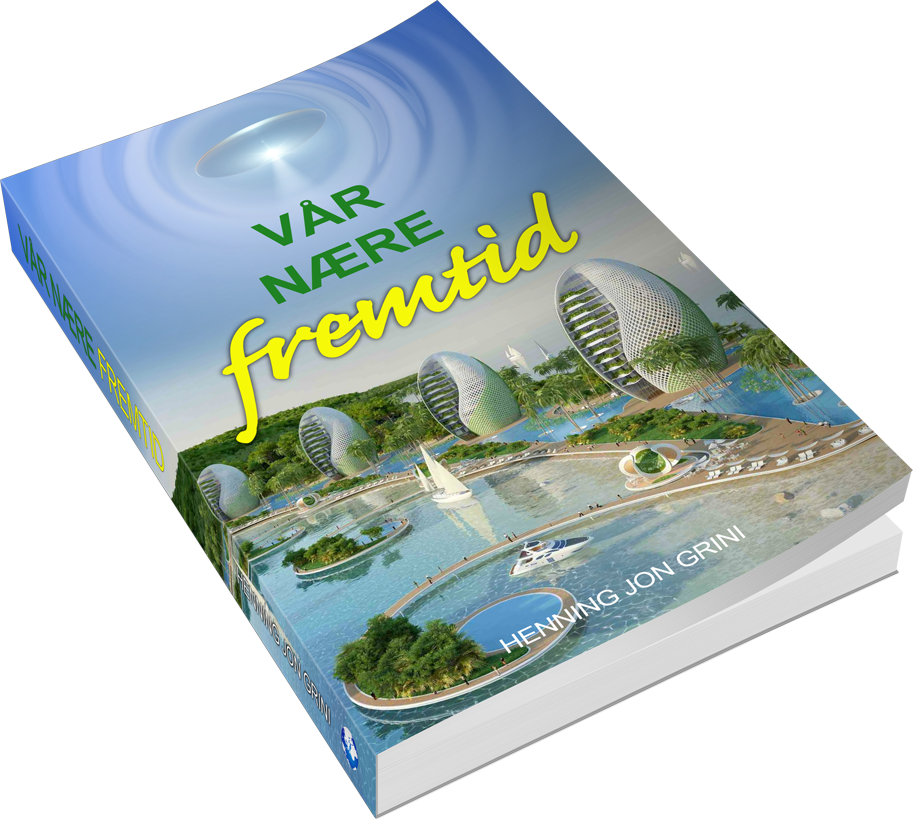 The book is currently only available in Norwegian, but we are working to get it translated into English.
You can help us with that by donating here.

The donation will be sent to GaiaInnovations, which the author has created and is the publisher of the book.

A JOURNEY INTO OUR NEAR FUTURE

This science fiction book is not about a dystopian future where humans have to fight for survival. Quite the contrary, it is about a bright future where we have managed to overcome most of our problems. It will show the unity, strength, love, and potential of man.

The reader is invited on a journey into the future and gets to experience how life is like there. The main character gets to know a woman, and feelings arise between them. Together, they explore society and have a multitude of conversations about the difference between ours and theirs. It will be a trip to a space station, down into an underwater research station, and not least meeting with our cosmic friends at the end of the book.

The world the protagonist encounters has a far more human-friendly and positive approach to life. The book is free from murder, crime, intrigue, fear and other misery. However, it contains imagination, good experiences and a lot of optimism and hope.

The future, – what will it bring? What will it look like? This is a large and fascinating topic which engages and worries a lot of people. Will we be plagued by escalating environmental catastrophes, or will we succeed in handling and controlling them? Will the future be full of pollution and plastic, or will it be clean and free from all kinds of littering? Will we manage to stop – and possibly reverse – the global warming? Will we have a society characterized by fear and misery, or filled with laughter and joy?

How the future is going to manifest itself is not cut in stone. It is we humans who decide what is going to happen in the years to come. The future is malleable and depends entirely on what we do. Still, there are hints and trends that point in certain directions.

Imagination is more important than knowledge, according to Einstein. I have made an attempt at describing the future based on many years’ interest in this topic, lots of self-studies and long experience in my professional work. Yes, ever since I was a boy I have taken a great interest in the future. In my room I had a model of the Space Shuttle and futuristic posters, and I read books about science and the Great Questions. I watched science fiction movies, and already as a sixteen-year-old in the early eighties I was programming computer games. Since that time my field of interest has expanded to encompass new societal models, spirituality, extraterrestrial life and more. All of this has become a part of this book.

In me a picture has gradually formed of a potential future far more positive than the impression one gets when one regards today’s world. One reason for this is the relatively onesided focus – especially by the media – on what is wrong and dysfunctional. An enormous amount of innovations and generally positive things are emerging, but far too seldom are the camera lenses directed at these.

This book is also meant to counterbalance all the gloomy and dystopic scenarios of the future that are being outlined in such a lot of science fiction books and movies. In my view, how we envision the future is in fact contributing to how that future will become. Precisely this is an important reason why I have written the book. It also views today’s society as seen in relation to the future described in the book, as well as the process needed to achieve it.

My view of the future is most profoundly bright and positive, but also realistic. Why, and in what way, you may ask. Because many of the greatest global challenges humanity struggles with today are on the mend. Wars, for instance, are statistically seen becoming fewer. In the futuristic scenario I describe we have put a complete ban on such primitive conduct. This is because of the fact that as our understanding increases, we develop. We have also seen a dramatic reduction of extreme poverty, and life expectancy has increased. In addition we now have an expanding cooperation between different nations in order to solve the problems we face, such as the environmental ones. All of this is far more important, in my opinion, than the technological development, (although this obviously is also helping to raise our level of conscience). For what are the benefits of technological development when it can be misused and we are in danger of destroying ourselves? This is why the human aspect is of such paramount importance, which is exactly what this book emphasizes so strongly. On the other hand, a lot of new technology is described in this future world, but it is subordinate to man and only employed for the benefit of people in a world far more human and friendly than today’s society.

Although humanity is progressing, new challenges arise and must be dealt with. Man-made climatic changes are serious and pose a threat to our future. We have arrived at the Age of Consequences. On the other hand, the climatic changes have an important function by reminding us that we cannot treat our planet exactly as we wish. The changes in the climate have made us conscious of the fact that our actions have consequences, and of our profound connection with Nature. They have made us find environment-friendly solutions, and this development will accelerate. Examples of other challenges we face are misuse of genetic engineering and increasing loneliness. At the same time, tenacious problems like social inequality still create great and increasing challenges and suffering, and are large contributors to the emergence of populistic leaders.

The good news is that nearly all our problems already have their solutions, but they are so thinly distributed throughout the world that only a few people know of all the good solutions that already exist. As time goes by, these and new solutions will more and more be put to use all over the world. This is something this book deals with.

How far into the future is the plot of the book thought to take place? This question is something I have left to the reader to imagine, but I can at least say that it is not so very distant, hence the title of the book. Some of our children and grandchildren will still be alive in the future I describe, and even some of the younger readers.

The Star Trek series and films are well known. They are set in a future more distant than the story in this book depicts. Science fiction often describes things that later have become realities, and Star Trek is no exception. The Star Trek universe was multicultural long before this was the norm. In the original series the leading role was for the first time on American television played by an Afro-American woman. Star Trek was apparently the only show Martin Luther King and his wife allowed their three children to watch. In Star Trek there was a normal and peaceful coexistence here on Earth with other beings in the Universe. Here were also the headquarters of The Federation, which was a union between different races. The Federation had abolished money, which in turn had removed the need for buying, selling and competition, as well as greatly reduced greed, jealousy and many other problems. Humanity had conquered illness and poverty. The series was first shown in September 1966, which happens to be the month and year in which I was born. Perhaps I wanted to take part in the fun?

At the time of writing certain politicians and heads of states appear frightening, but here it is important to take the long view. Present politicians will long ago have left their political offices by the time of the future scenario I describe here. As humanity gradually acquires more empathy and wisdom, our understanding and development will increase, and future leaders will reflect this.

Many older people alive today have witnessed an enormous social change, and the development over the next decades will go significantly faster than during the preceding decades. Precisely for this reason this time is so crucial for our future. We need visionary persons who can express themselves through their works of art, authorship, inventions and innovations, just to list a few areas. We need dreamers! Yes, we have a great need of everyone who wants to contribute for the benefit of humanity simply by seeing the best qualities in humans and our enormous potential, of which we have only just started to glimpse the contours.

It is my hope that you will come along on this journey into our near future together with the main person and the ones he meets there, which also include friendly intelligent life forms from other civilizations. The book is free from murder, crime, intrigues, fear and other kinds of misery. It is not a dystopic description of how people have to struggle to survive in a largely destroyed world. On the contrary, it speaks of happy experiences, optimism, hope, imagination and love. It has a more philanthropic and positive approach to life. There IS light in the tunnel, and my wish is that more of us will see it and together create a fantastic and enriching future for us all, full of vivid and empathic people. 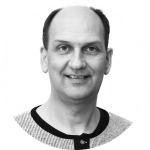 was born in Bergen, Norway in 1966.
All his adult life he has been concerned with the big questions in life. He is socially engaged, and have started several businesses with the intention of contributing to the planet’s best, as well as lifting the human consciousness to a higher level. He has, among other things, founded, run and been an editor for the Norwegian magazine and publisher «Ildsjelen» (now Harmoni) for 12 years. Currently, he founded the organization GaiaInnovations and the website www.countdown2contact.org of which this book is a part.
He has his own website (norwegian only): www.inspirasjonogideer.no

If you want to read another book by me, this is an option (Kindle eBook or paperback):

Towards a brighter future

for You, Mankind and Mother Earth 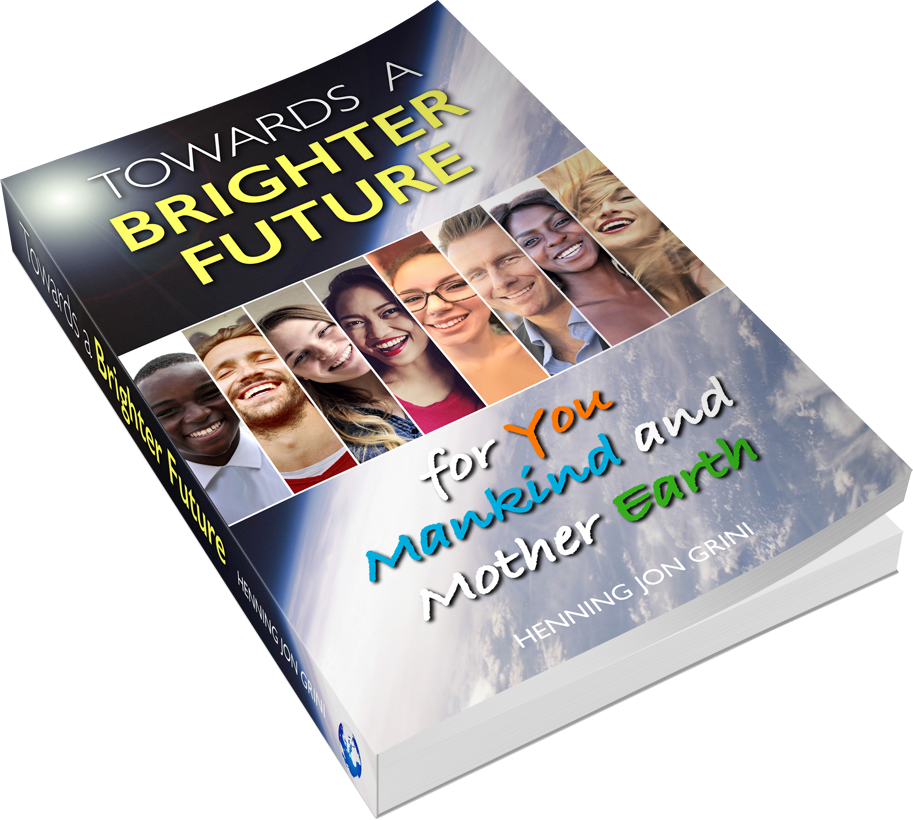